skip to main | skip to sidebar

Warm fresh cream to tepid temp. (I warm it to around 86 degrees). Fill the churn to 3/4 full and churn until the tiny dots of cream gather into lumps. The butter is ready to take out of the churn. Do not over churn or the buttermilk will be mixed back into your butter. It should be lumpy when taken out of the churn.
Put butter into a large shallow bowl and rinse out the buttermilk. Pour tepid water over the butter while you work it with your hand until the water runs clear. Squeeze the wash water out of the butter by hand or with a paddle on a tilted board.
Add canning salt to taste. (about 1 tsp. per pound). Work the salt in thoroughly Press butter into a mold and cool.
(You may wrap your butter in parchment paper which has been soaked in water. This helps keep the butter fresh when stored in a refrigerator).
Posted by S. Nicolas Originals at 9:36 PM 1 comment:

Here is a Cottage Cheese recipe I've been using for quite a while. Don't remember where I got it.
1 gal raw milk
1/2 cup cultured buttermilk
1/4 tsp. liquid rennet
1/4 c. cool water
Warm the milk to 86 degrees F. Stir in the buttermilk, mix the rennet into the cool water and add to the warmed milk. Set until it coagulates, usually about 1 hr.
Cut the curds into 1/2 inch cubes. Heat slowly by the double boiler method until the temp. reaches about 110 degrees. Hold at this temp. for 30 min. and stir often, gently to prevent matting . When the curds are firm, place into a cheesecloth lined colander and let drain for 20 min. Lift the curds in the chees cloth and dip into a pot of cold water. Drain until the curd stops dripping place curds in a bowl and add salt and cream if disired.
Posted by S. Nicolas Originals at 9:27 PM No comments:

Grandma's cheese recipe.
The milk needs to be very fresh.
Warm 4 gal. fresh raw milk. (I warm it to around 86 degrees F.) Keep the milk temp the same (86 degrees) and let rest for 40-45 min.
Mix 1 tsp. rennet with about 1/4th. cup water and stir into warm milk. Let set until curds form and are set. Cut the curds into small chunks ( about 1/2 inches) and bring temp. to 97 degrees F. continuing to stir slowly. Keep at same temp. for about 30 min. stirring occasionally, but let it rest the last 5 min. or so. When curds settle, drain the whey.
Line a stainess steel colander with cheese cloth. Pour off whey from strainer pot, reserving about 1/3rd of it in the pot. Set strainer over the top of whey in the pot and cover, keeping whey at 97 degrees. for 30 min to 1 hr. ( Lessen the time from 1 hr. for moister cheese).
Remove slab of curds and cut into 1/4 in. strips about 6 inches long. Stir in 1 Tbsp. coarse salt. (Pickling or sea salt.) Place curd into cheese press and leave overnight. Remove from press, cover with coarse cheese cloth and let dry. Allow to ripen for 4 weeks for mild cheese, 3 months for medium, and 4 to 5 months for sharp. (Cheese may be waxed after removing from press if you wish).
Posted by S. Nicolas Originals at 8:56 PM 1 comment: 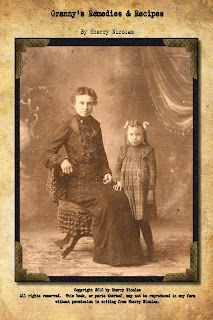 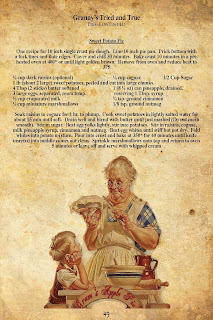 Yup! I am now an Author...well, sort of. More about that later.

It's been sooo long since I've posted here and so much has happened, but I guess that is true for everyone.

My poor ol' hubby is now in early third stage of Alzheimers, and he also has Parkinson's Desease. I've not been able to sculpt or do any of the fun things I spent a lot of time on before. I really miss doing all that crafty stuff, but hubby takes all my time now as I'm his caregiver. The kids are good to come give me a lift when I need it or come stay the night so I can get some much needed sleep. Paul was sundowning badly and was up all night every night, but the Dr. gave him some medication for bypolar which helped tremendously. He still sundowns, but usually for only a couple of hours in the late afternoon now. He usually knows everyone still and is generally pretty docile, although there are moments when it's the reverse.

I miss my dear friend and lifelong love so very badly. Of all people in this world to have this terrible terrible desease, this gentle soul does not deserve this, but I suppose that can be said of anyone with this insidious mind stealing desease, or with any other horrible illness. I guess we just have to accept it as part of the human condition.

One night while I was up with Paul most of the night I began looking at my grandmother's old book of recipes and remedies, and thought "Why not copy them and put them in book form." So that's what I've done. I'm selling copies at $9.97 each to help defray some of the medical bills Paul is incurring. I can either email a link from which the ebook in Adobe pdf form can be downloaded or I can just burn it to a CD and mail it. Add $1.97 for shipping. I use Paypal and my email is snicolasoriginal@aol.com

In the early 1900's Grandma lived in rual Texas and did not have a commercially published cookbook as we do nowadays but wrote down her recipes, etc and pasted them into an old law book.
Many of the recipes were handed down from mother to daughter since colonial times, and include a recipe for Martha Washington‘s Cherry Bounce. The cooking recipes have been updated for use with modern cooking and baking methods. They are good recipes and I use them myself.
I am including Grandma’s home remedies because I think they are so interesting and some are hilarious. Also included are some of the poems that Grandmother loved and a few letters discussing women’s suffrage, which she apparently cut from a newspaper in the early part of the 20th century and pasted into her book. They are very interesting and give an insight into the lives of many rural women of the time.
Many of the remedies were given her by others, and I have copied those and the letters verbatim, so the grammatical errors were not hers.
The editing and Graphics by Nicole Franklin of Kaniki's Connections. The photos at the top of this post are the cover page (and that is my Grandmother in 1900) and one of the pages from the book. It's done to look old, old as Grandma's book actually does. The pages ar yellowed and very brittle now.

I think you would get a kick out of the remedies and would like many of the recipes. A few of the recipes are actually my own.
Posted by S. Nicolas Originals at 10:50 PM 2 comments:

Jesus is Watching You

A burglar broke into a house one night. He shined his flashlight around, looking for valuables, and when he picked up a CD player to place in his sack, a strange disembodied vois echoed from the dark saying, "Jesus is watching You!"

He nearly jumped out of his skin, clicked off his flashlight and froze. When he heard nothing more after a bit, he shook his head , promised himself a vacation after the next big score, then clicked the light back on and began searching for more valuables.

Just as he pulled the stereo out so he could disconnect the wires, clear as a bell he heard, "Jesus is watching YOU!"

Freaked out, he shined the light around frantically, looking for the source of the voice. Finally, in the corner of the room, his flashlight beam came to rest on a parrot. "Did you say the? he hissed at the parrot.
"Yep," the parrot confessed, the squawked,:"I'm trying to warn you." The burglar relaxed. "Warn me, huh? Who are you?" "Moses", replied the parrot. "Moses?" the burglar laughed. "What kind of stupid people would name a parrot 'Moses'?" "Probably the same kind of people that would name a Rotweiller Jesus," the bird answered.

I found this stuffed in Mom's bible. Thought it was pretty funny.
Posted by S. Nicolas Originals at 11:52 AM 3 comments:

You know you're getting old when your grandchild asks you to close your eyes so she can give you a surprise and you don't wake up until the following afternoon. 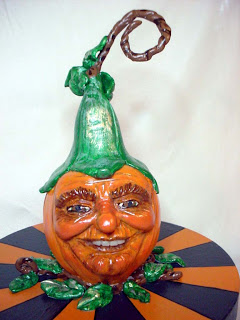 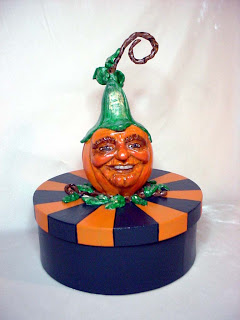 Here's a Pumpkin Head Candy Container that I've been working on. The gourd is sculpted Apoxi Sculpt. Fun stuff that.
I'm still not quite up to parr from my fall last week. Boy did I ever try and do myself in. Felt pretty sorry for myself to a few day, but I'm getting better each day now, so no one's going to have the pleasure of planting me for a while yet. Ha!
Posted by S. Nicolas Originals at 8:45 PM 1 comment: